Total Number of Species Recorded in 2011

TWITE at The Lodge

A TWITE present at lunchtime off the reserve, just left of the path
towards Biggleswade Common. Go just beyond the lake and stream and
there are a few cut silver birch on the ground. The Twite was perched
on top of these with 3 Lesser Redpolls for several minutes. It flew
off strongly but low in the direction of the wind turbine at 13:20 (Richard Patient).
Posted by Lee G R Evans at 15:50 No comments:

The first LITTLE BUNTING for the county

As usual with these rare events, I was many. many miles away from Bedfordshire when news broke of Ross Ahmed's county first discovery and had to wait patiently before I could finally get an opportunity to visit and search for it. Anyhow, that chance finally arrived this morning and I was on site and in position shortly after 0900 hours. DJO, MJP, JG, LC, BC and a few other local observers were already in situ when I pitched up at the bridge over the river and after several shifts of buntings in the tree tops, I decided a different approach as this was clearly going to be a long haul.
I followed the considerably muddy track along the outside edge of the maize strip checking Reed Buntings as I advanced. A sizeable flock of them were feeding at the tops of the maize on the seedheads. As I got perhaps 130 yards along, I heard the familiar hard ticking call of the LITTLE BUNTING and briefly got onto it as it perched alarmed on a seedhead. It then flew to the adjacent hedgerow and perched, still scolding loudly (repetitively ticking) and flicking its tail at the same time. Quickly, it dropped back down into the field and as I manoeuvred to get into a better position of the light, it flew back into the hedgerow and perched, virtually in exactly the same spot. I then saw Tony Hukin appear and beckoned him over. Within minutes of him joining me, the Little Bunting returned once more to the exact same spot and perched - this time in brilliant view. Just as I was about to get the perfect photograph, the barrel gun in the field went off and flushed all of the buntings. All returned to the maize.
All 17 other observers on site all then came round from the bridge and joined in with the search but with the barrel gun exploding every half hour and the jittery nature of the flock, perhaps numbering 90 Reed Buntings with an additional 37 Linnet, the task was a very difficult one indeed. Although I heard the bird ticking after I last saw it in the hedgerow at 1015, I never personally set eyes on it again after that time, despite a lot of diligent searching, but Dave Odell and Pete Smith independently glimpsed it subsequently some 70 yards further along the bordering scrub. This is one very difficult bird, just like all of the other Little Buntings bar one I have tried for this winter in the UK and I feel very lucky indeed to have connected.
DIRECTIONS
Park sensibly in Great Barford village NW of the Barford Great Ouse roadbridge and walk west along the public footpath that takes you along the north side of the river. Keep walking for around 750 yards to a green bridge that crosses the river. At this point, there is a narrow strip of maize bordering the riverbank that is harbouring the wintering bunting flock. You can choose to either watch from the bridge as the Reed Buntings perch high in the trees or skirt the edge of the field and search from there - take your pick.
ELSEWHERE


During the afternoon, I failed to locate the Twite in the rough field opposite the entrance to The Lodge RSPB (Sandy) but did count 107 Linnet, while 6 BRAMBLING were feeding with Chaffinches in the horse paddocks thereabouts
Posted by Lee G R Evans at 19:23 No comments:


Well GROVEBURY PIT is on a roll! After last week's juvenile GREAT NORTHERN DIVER (still present today but mobile & elusive), Saturday saw a PIED AVOCET appear briefly with Lapwings and today at lunchtime, a cracking pair of SMEW and 5 immature/female COMMON SCOTERS remained present. Unprecedented rarity action at this little-known site! The PEREGRINE pair were showing well too, sitting on one of the sand spits..... 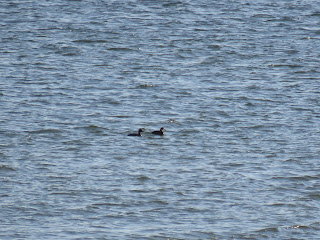 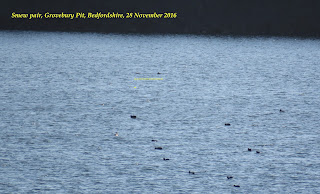 A GREAT NORTHERN DIVER for a second day and VELVET SCOTERS relocated...

THURSDAY 24 NOVEMBER 2016
Had some great fun with Johnny Lynch at GROVEBURY SAND PIT in BEDFORDSHIRE, where the juvenile GREAT NORTHERN DIVER he espied yesterday afternoon was still present and afforded the two of us a fabulous swim past - see my photographic efforts below. Did a full inventory of the site whilst I was there with 22 Great Crested Grebe logged, Grey Heron, 18 Cormorant, 99 Atlantic Canada Geese, 12 Mallard, 8 Common Teal, 28 Wigeon, 66 Tufted Duck, 39 Northern Pochard, 6 Moorhen, 202 Coot, 4 Lapwing, 2 PEREGRINES (male & female), 22 Lesser Black-backed Gulls and an adult Great Black-backed Gull. 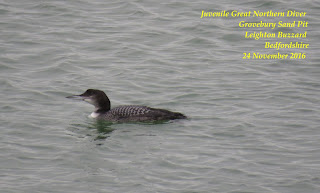 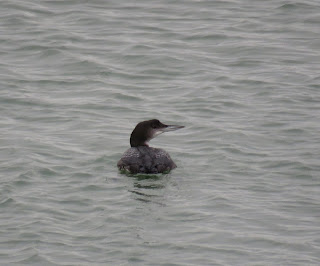 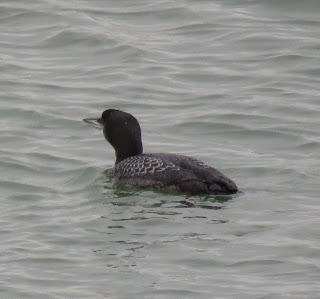 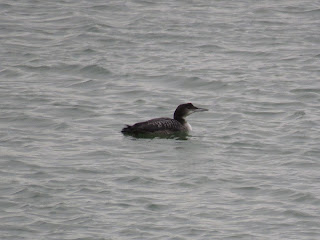 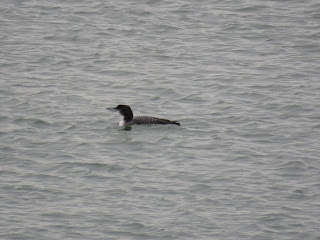 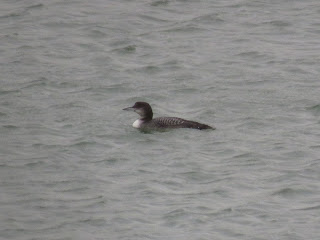 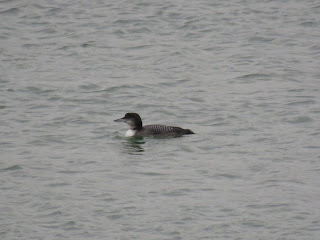 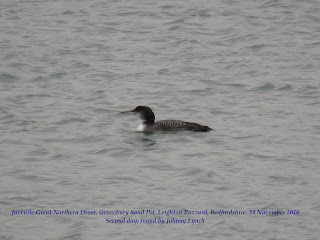 I later joined Jim Gurney at ARLESEY BLUE LAGOON mid-afternoon where the two wandering juvenile VELVET SCOTER, miraculously located the following morning after departing Gypsy Lane West by the location's regular checker Andy Grimsey, were both showing well, diving frequently on the far side of the boating lake. 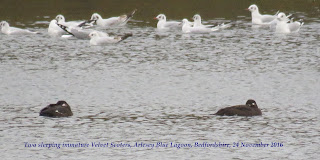 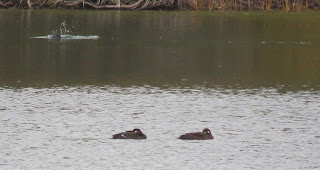 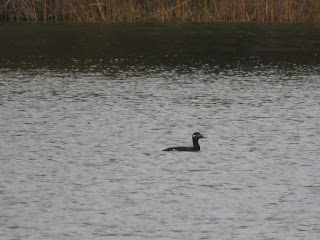 Thanks to a conversation with Barry Nightingale this evening, he and I agree that today's two immature VELVET SCOTERS at Gypsy Lane West, Broom GP, represent the 11th county record and 20th-21st individuals and the first in 25 years!! An excellent find by Jim Gurney and seemingly the same two immatures that were recently present at Willen Lake South Basin on 7th-13th November but where have they been in the interim? 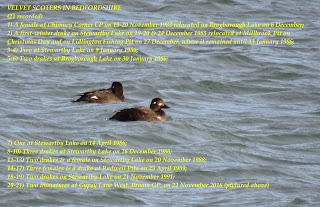 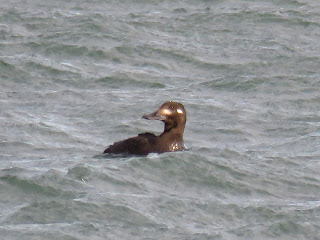 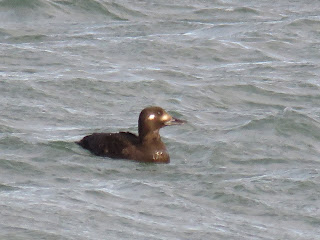 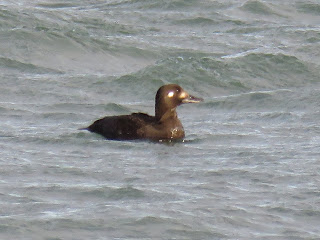 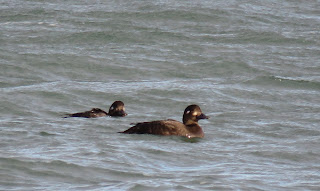 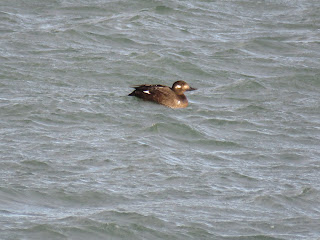 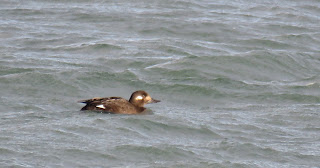 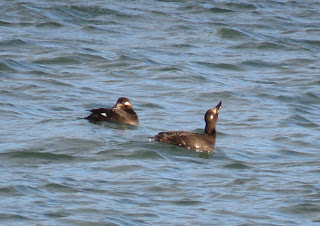 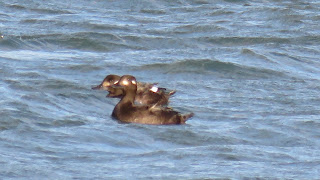 Lovely morning for a walk round Henlow Grange, frosty underfoot with, sunny and calm. GREAT GREY SHRIKE was again in the area just north of the sewage treatment works, perching on fence posts of the two newish fields. It made one sally out over the stubble, flushing a flock of 20 Skylarks before returning to its perch. It the dropped into the longer grass at the base of the fence. I was expecting it to again return to the fence but it never did. I did not see it fly away despite watching where it had landed and could not re-locate it. How can it be so elusive?

Spring would seem to be just around the corner: at least 4 Song Thrushes were singing; Mistle Thrush, Skylark, Corn Bunting, Chaffinch and Dunnock were also singing; at least three Great Spotted Woodpeckers were drumming;  and Great Crested Grebes were dancing. Although there is no activity in the rookery yet.

Also seen were a male and female Stonechat near the market gardens where there were also three Yellowhammers and a flock of c.40 Linnets.

When I got home and totted up, I had recorded 55 species in a couple of hours.

It may be of interest to note that I have recorded Great Grey Shrike and Stonechat more often than Coot from my patch this year!

p.s. A Robin is nest-building in our garden in Henlow as I type this.
Posted by Lee G R Evans at 18:59 No comments:

THE BIRDS OF BEDFORDSHIRE

The County Avifauna was last published in 1991 by Paul Trodd and David Kramer and can be purchased from me at the special price of £19 inclusive of posting & packing. For orders, email LGREUK400@aol.com

Lee G R Evans
I have been birding since 1969 but became obsessed with 'twitching' in 1974 and haven't looked back since. Have driven over 1.3 million miles in pursuit of rare birds in the UK, where to date I have recorded 588 species in Britain and Ireland. I also have a fascination for the Birds of the Western Palearctic, where I have currently recorded 880 of the 1,064 species ever recorded. I am widely travelled in North America, as well as in Africa and Asia, and have written at least 29 books on my chosen subject, including best-sellers ''Ultimate Site Guide to Scarcer British Birds' and 'Rare Birds in Britain 1800-1990'. Established the UK400 Club in 1981 to cater for the most obsessive of the British birding fraternity and now concentrate on online publishing, via the www.uk400clubonline.co.uk website. Record Birding achievements include recording 386 species in Britain & Ireland in 1996 and 627+ in the Western Palearctic in 2008